What is P2P? Role and Features of P2P – Peer To Peer

You may have heard somewhere about the phrase Peer-to-Peer (P2P) but do not understand precisely what they are. You might think this is a new technology product.

But no, actually, the concept of P2P network architecture first appeared in 1969. And the initial use of P2P networks in business was implemented in the early 1980s.

So what is P2P? Roles & Features of P2P – Peer To Peer, Kienthucoin will explain in the following article along with information about the benefits and harms for the crypto industry. What is P2P Peer-to-peer?

What is P2P? Peer to Peer – P2P is a system of computers connected to each other via the Internet and sharing data without a central server. Peer-to-peer computer networks use a distributed (decentralized) structure.

In other words, the P2P network will have no distinction between the server and client.

Peer-to-peer P2P in the Cryptocurrency Industry

In the cryptocurrency industry, the term P2P is commonly used to refer to trading cryptocurrencies or digital assets through a decentralized network.

The concept of P2P is applied in many different uses. Not only used to exchange files but also to exchange information between people. Especially in situations of cooperation between a group of people in the community. 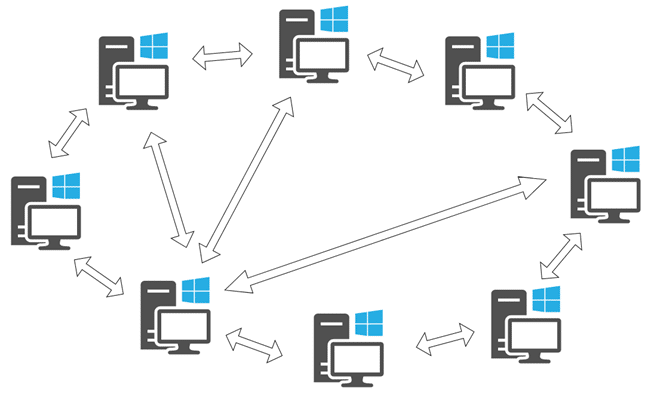 How does a P2P peer-to-peer network work?

As mentioned above, a P2P peer-to-peer network has no server and no client. Instead, each node keeps a copy of the files, acting as client and server for the other nodes.

So, in essence, P2P is maintained by a distributed network of users.

On a peer-to-peer network, devices use software applications to mediate data sharing. When you want to find and download files, you can send search requests to other devices on the network. And once they’ve downloaded a file, they can act as the source of that file. 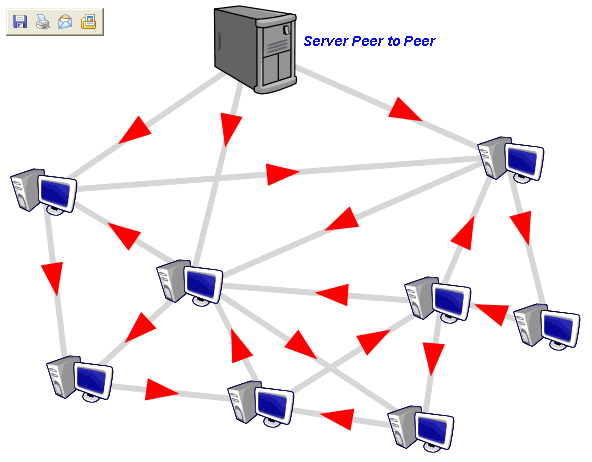 This is a type of Peer to Peer in which nodes are set up randomly. This type of network is resistant to nodes frequently joining and leaving the network.

However, although easier to build than a peer-to-peer network – P2P has a structure, but they use more memory and CPU. Because when searching for content, the search request is often transmitted across the network to find as many hosts as possible. This means that the network can constantly be flooded with search requests.

Besides, an unstructured P2P network cannot guarantee that a content search will be successful. 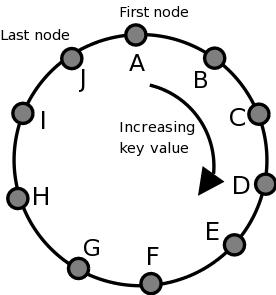 This is a type of peer-to-peer network where nodes are built according to a specific structure. Enables buttons to quickly search for files, even if the content is uncommon.

Although highly efficient, structured P2P networks have a higher degree of centralization. In addition, the cost of setup and maintenance is also higher.

This type of P2P network combines a traditional structure (server and client) and a peer-to-peer network structure.

Compared to the above two types of P2P networks, hybrid networks are easier to build. In addition, they inherit all the advantages and performance is also better.

What is the role of P2P in Blockchain?

The peer-to-peer (P2P) network architecture in Blockchain is the element that makes the transaction of cryptocurrencies without going through an intermediary.

So there is no central bank or server that can control the transactions. Instead, it uses a Blockchain ledger to record all transactions publicly.

Besides, the nodes will take on different roles. For example, full nodes help maintain network security. This is done through the verification of transactions according to the consensus rules.

Some limitations of P2P on Blockchain

Because there is no central server, writing transactions to the Blockchain requires a large amount of computing power. This significantly reduces performance; is a significant obstacle to its expansion and broad adoption.

Besides, when the hard fork event occurs (split a chain into two new parallel chains). Due to the nature of most Blockchains are decentralized and open source. So without good security, the two networks can be attacked by replay attack (Replay Attack)

Through the information, Kienthuccoin shared about “What is P2P? Roles & features of P2P – Peer To Peer”, I hope you have mastered the most basic knowledge of the terminology in this cryptocurrency market.

What are some frequently asked questions about P2P peer-to-peer networking?

What are the advantages of a P2P peer-to-peer network?

P2P networks have several benefits. For example, in the traditional client-server network model, if one server goes down, it can cause a drop or disconnection of the entire network. But in P2P, if a single device crashes, other devices on the network can help fix the problem. They also help ensure that network traffic is not congested at a single device, as traffic processing is distributed across multiple computers.

What is P2P Lending?

P2P lending allows individuals to receive loans directly from others, eliminating the role of middlemen for financial institutions. Sites that facilitate peer-to-peer lending have increased dramatically.

What is P2P Binance?

P2P Binance is a peer-to-peer cryptocurrency exchange. Users can post trading ads to buy and sell crypto assets and trade directly with other users. P2P Binance allows users to trade cryptocurrencies to choose their preferred price, amount, and payment method.