What is Coin? What are tokens? Compare between Coin and Token

When participating in the cryptocurrency market, also known as cryptocurrencies, you must have heard about Coin & Token. To understand what the crypto market is like, we need to understand these two basic terms first. Because most users today have serious confusion between coin and token, consider them to mean the same thing. However, the reality is entirely different, these are two terms with other concepts. So what is Coin? What are tokens? Why is Coin & Token easy to confuse users? Let’s find out with Kienthuccoin right in the following article.

Currently, there are more than 10,000 publicly traded cryptocurrencies on the market, including Coins and Tokens.

In cryptocurrency, coin is a type of cryptocurrency built based on a separate Blockchain with open source code, they work independently of each other, data is stored in common, so anyone Any user can join its network. Coins are of two types: Altcoins and Bitcoins. Altcoins are all coins other than Bitcoin. Some popular coins on the market include Bitcoin, Cardano, Neo, Ethereum, Stellar…

Token (token) is also a cryptocurrency, this coin is encrypted and usually issued from Initial Coin Offering (ICO) projects. Tokens are developed based on the Blockchain of a specific type of coin. Therefore, it uses a predefined protocol that has no say in the development of the network. For example, there are tokens built on the Ethereum platform according to ERC-20 standards and tokens built on Binance according to BEP-20 standards. In addition, several tokens use the platform of other coins such as WAVES, NEO, ICON, and even Bitcoin. Tokens are also used as a payment method inside the project of a specific ecosystem, performing the same functions as coin. A company’s share of capital typically represents tokens. This makes us often confuse tokens with Coins, but the main difference is that Tokens allow the holders of these Tokens to join the system network and access the functionality of the project. This is also the attraction of the token that makes the majority of participants interested and choose to invest. The same Tokens will be most used in a certain project.

Some Tokens will have their own Blockchain platform development (foundation Coin), becoming a development platform for other Tokens without the need for Coins. We can call the token the “sketch” of the coin. When in ICO stage, it is Token. After a while, the research & development team builds its Blockchain with open source code, and it will become a Coin, the development process from Token to Coin usually lasts about six months – 1 year. Each token will have a different route – often called a Roadmap, and some Tokens are forever just Tokens.

In terms of features, Tokens are divided into two main types:

Security Tokens: This is a form of ICO electronic shares and is issued as a token. You will receive dividends based on the number of shares you own in that project. Security Tokens also allow you to vote, vote, or participate in deciding some of the project’s work.

Utility Tokens: As utility tokens, they are not created to invest directly in a project like Security Tokens, but can be used to accomplish a specific goal or feature for each project: payment, discount price, vote, upgrade membership. Example: Token developed for GIGDollar.io project, used for payment, membership upgrade, trading, and voting. Binance’s BNB Token Offers Discounted Transaction Fees…

There are also a few other types of Tokens:

Platform Tokens: This is a token that uses Blockchain infrastructure to provide decentralized applications (also known as dApps) for different uses. For example, Tether (USDT) is classified as a stable coin. Simply because it is pegged to the USD currency at a 1:1 ratio, but it can also be classified as a Platform Token due to being built on the widely used Ethereum blockchain. Leveraging another party’s blockchain infrastructure benefits from the blockchains they build with enhanced security and the ability to support transactions.

Transactional Tokens: Used for transactions. That is, they act as a form of unit currency and are exchanged for goods and services. Tokens in this form generally behave like other types. For example, with decentralized cryptocurrencies, such as BTC, USDT, and DAI, users can make transactions without the need for traditional intermediaries or Governments. In addition to functioning as a currency, Dai provides transaction performance to other networks. Take, for example, the POA Network that created xDai, a Dai-like transactional token that lives on a sidechain, allowing for fast, inexpensive transactions.

Governance Tokens: As decentralized protocols continue to evolve, the need to refine the decision-making processes around them is critical. On-chain governance allows all stakeholders to collaborate, debate, and vote on because of the system management. Governance Tokens power blockchain-based voting systems. As they are often used to signal support for proposed changes and vote on new proposals. For example, in Maker Protocol, the governance token is MKR.

Equity Tokens: If the Token represents some stock or equity in the company that issues it, it is an equity token. However, very few companies have tried such an ICO because there are few regulatory guidelines on what is legal and what is not.

Payment Tokens: Have no other purpose than to pay for goods and services.

Thus, each type of Token will have different characteristics and features that require owners to learn in detail to decide to own.

Token generation is more accessible than Coin, because you don’t have to generate new codes or modify existing code, you need to use standard templates from platforms like ETH, which is Blockchain-based and allows anyone to Generate new Token in just a few steps. Using the same platform to create Tokens provides smooth interoperability, so that users can store all different types of Tokens in the same wallet. ETH is the first platform that simplifies the process of creating tokens.

2. Compare between Coin and Token: 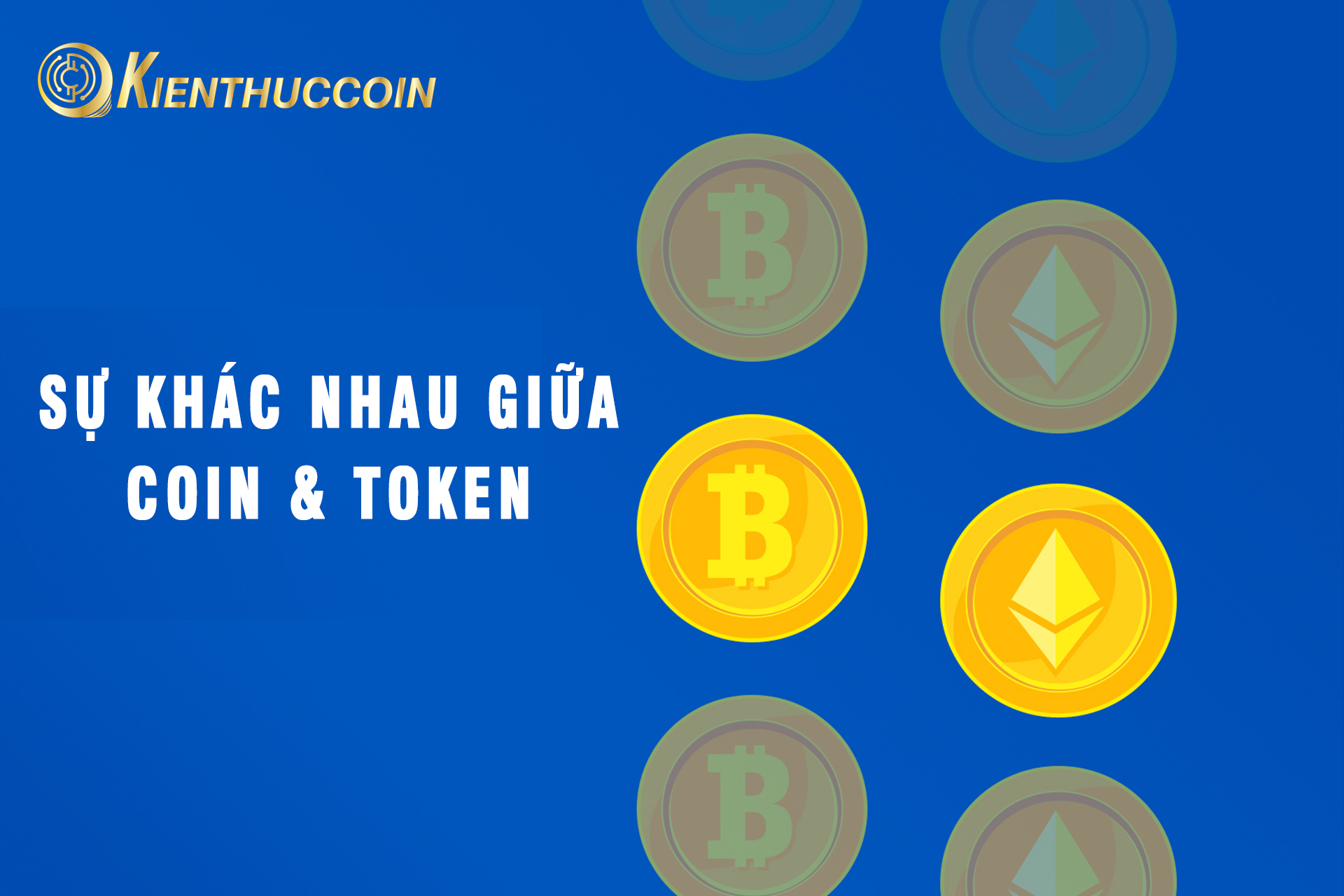 Through the above article, Kienthuccoin.com hopes to have provided investors with helpful information about what coin definition is, what token is, and how to distinguish between Coin and Token. Investors should understand that a thorough understanding of cryptocurrencies is essential to invest in this potential market seriously.